Advent of Europeans (British) in Nigeria 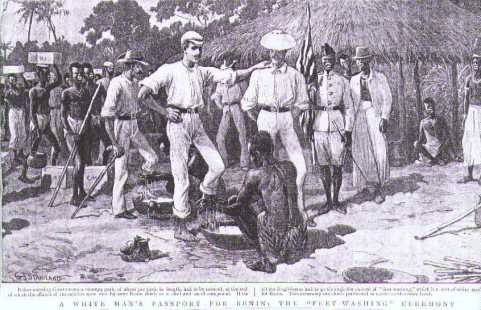 Following the Napoleonic Wars, the British expanded trade with Nigerian interior. Prior to this period, European activities was rampant at the waterways. There are diverse reasons why Europeans decided to enter Nigerian hinterland. One of the reason was due to Industrialisation in Europe. As a result of this, different European countries were in search for raw materials to be used to service their industries at home. Since Africa in general and Nigeria in particular having these raw materials in large chunk hence the imperativeness of the advent of Europeans in Nigeria. There are different explorers noticeable as at this time like the Lander Brothers, Claeperton, Mungo Park, etc. They invariably helped Europeans in making their way into the region to be known as Nigeria. From this elucidation, it is safe to say economic motive was part of the reasons for European advent in Nigeria. The Industrial Revolution that occurs in Europe simple means the growing of industries by the use of machine (technology). It began in Great Britain and later spread to France, Germany, Russia and Italy. However, the problem with the Revolution is that these various countries needed raw materials such as cotton, palm oil, rubber, to ensure the continuity of the home industries (European Industries). These raw materials are sufficiently available in the tropicl region of Nigeria.
It is evidence through the search for raw materials. The European countries also needed a place to market the manufactured products as they had produced goods more than their home market could absorb, due to improvement in the level of technology. Consequently, the acquisition of colonies in Africa which Nigeria was not left out. Not only that, the search for new market became a controversial issue and rivalry among these European countries as each of them wanted to secure the best marketable place. With this, Nigeria became the focus of attention of the industrialized European countries.
The need to maintain balance of power in Europe was another factor responsible for European advent in Nigeria. This problem arose from the need for territorial expansion. Even small states were contesting for territorial expansion at the expense of big countries like Britain, France and Russia in order to maintain power equilibrium. The rising of new states between or among European countries, therefore made some of them turned their attention to Nigeria and some other African countries as Europe has become overloaded with territorial expansion.
The point that civilization was a reason for European advent in Nigeria to some scholars is far from being true. The reason being that the European countries regarded their invasion/advent in Nigeria as “Civilized Mission/Evangelical Mission”. To them, the advent was “humanitarian” having the objectives of spreading civilization, abolition of slave trade and spread education. The question therefore is that if European advent/invasion is for the abolition of slave trade, what is the justification for asserting political authority over African states?